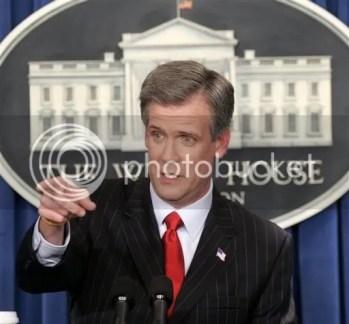 Only a couple days ago I celebrated my 32nd birthday, and boldly proclaimed that I’d only lived a third of my life. Today I heard the news that Tony Snow lost his battle with cancer at age 53. It’s a stark reminder that we never know how much time is left. I hope that there is some comfort to Tony’s friends and family that he crammed so much life into those 53 years.

It’s obvious that he loved what he did. You only had to watch one of his spirited debates with reporters during his time as press secretary to see that twinkle in his eyes. When he took over as press secretary from Scott Mcclellan the difference was striking. All of the sudden, it was no longer news to show the white house press briefings which is a sign that he was doing a good job.

Yes, he was a partisan, but he was able to argue conservative ideas so articulately because he truly believed them. He had a great ability to connect with his audience on radio or behind the camera.

He demonstrated what it meant to work a high-profile job and fight cancer with true grace and a positive attitude: