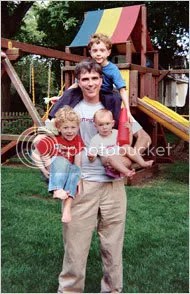 A friend of mine was recently diagnosed with stage three colon cancer. He literally called me up out of the blue and said “Bryant, it’s been great knowing you. I’m not going to be around much longer, but I just wanted to let you know that I’ve enjoyed playing tennis with you and I’ve lived a good life.” and that was it. I was stunned given that he was so healthy and relatively young. To put it in perspective, we played tennis regularly and he would run me around the court even though I’m more than ten years younger.

I had no idea what to say in response except that I’d be praying for him and his family. I thought he showed great courage in the face of tragedy. While trying to make sense of it, I began to google cancer stories and stumbled on Randy Pausch’s Last Lecture. If you haven’t seen it yet, do yourself a favor and take the time to watch his Last Lecture:

When I first saw it, I was blown away! Here was a man that would obviously soon die, yet was still living life with such enthusiasm. In fact, this dying man seemed to be more fully living than most people who are 100% healthy.

His lecture was filled with insight and all about how to “Really Achieve Your Childhood Dreams” and live fully with cancer. He talked about the specific dreams he had as a kid and then he discusses, one by one, how he has achieved them (except becoming an NFL star 😉 ). Along the way he ran into walls, and the moral of the lecture was that you need to be persistent to get around these walls and achieve your dreams. He says during the lecture:

Best of all, he wasn’t going to go gently into that dark night. He was going to go out swinging! In fact, he started the lecture by doing one-armed push-ups!

Sadly, all good stories have to come to an end and today he passed away.Yet another one dying young due to cancer, but (if it’s any consolation) at least he left his last lecture for us to enjoy and to teach us how to die.

When my time comes, I only hope that I can go out as fiercely roaring.

Do not go gentle into that good night, Old age should burn and rave at close of day; Rage, rage against the dying of the light. -Dylan Thomas