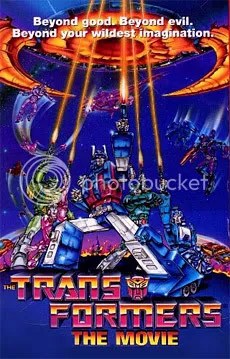 I think everyone has that one thing that brings them back to being a kid again. For many people, it’s a specific song or a type of food.  For others, it’s an old friend or TV show.

For me, it’s Transformers the Movie (the original 1986 cartoon — not the ruinous michael bay version).

We rented the 20th anniversary version this weekend and it was fascinating to see my 8 year old son loving a movie that I loved when I was his age. I think for a certain segment of the population, watching that movie will always take them back to being a kid.

There was something about that original movie and cartoon series that really resonated with me and many others. In many ways it’s better than current movies. In fact, slate had an insightful article about how it’s better than the new transformers movie:

Bay’s new Transformers is fun in its own goofy way, and there are enough sops to the fanboys that most will go home happy. Peter Cullen reprises his role as the voice of Optimus Prime, and the screenwriters manage not one but two invocations of the immortal phrase “more than meets the eye.” But there’s nothing even approaching the original’s narrative depth. The good guys beat the bad guys, and no one we care about is harmed in the process—the movie hasn’t succeeded in making us care about anyone.

As the slate article goes on to describe, Bay cheapens the movie by adding in sex and meaningless violence:

The high-octane violence and PG-13 attentions lavished on Megan Fox‘s torso may attract some new young fans, but in the end Bay’s Transformers feels timid compared with the 1985 version.

Though to be fair, there was no shortage of violence in the original movie. In fact, many of the original characters (often called Gen 1 in TF fanboy lingo) die in the movie. When I first saw that movie as a kid, it was heartbreaking to see characters that I’d grown up with and watched everyday on TV die on the big screen.

The hardest death to see was, of course, Optimus Prime. He was the leader of the autobots and in many ways the “John Wayne” of my generation.  He was the ultimate example of a leader and always took the high ground.  He led by example and sacrificed himself to further the noble goals of the autobots. His classic quote is:

Freedom is the right of all sentient beings. 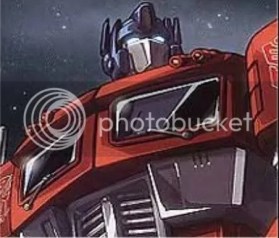 It was also shocking that the original cartoon movie the animated characters actually used profanity. How surreal to see Transformers and their human friends dropping the s-bomb!

In many ways, the original cartoon series was so perfect and harmless with its clearcut good vs evil that it reflected the blissfulness of youth. The cartoon movie, with it’s death and profanity, started to pull those of us 9-year kids toward adulthood by showing more of what the real world is like — definitely a transforming experience.

One thought on “Transformers and Dreams of Youth”